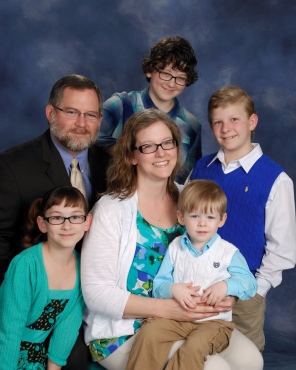 Dr. Ricky Persons became our senior pastor in August 2011. He grew up in Clinton, MS and completed his B.A. in Communication at Mississippi College, Clinton, MS, in May 1992. He then graduated with a Master of Divinity with Biblical Languages with a concentration in Historical and Theological Studies from the New Orleans Baptist Theological Seminary in New Orleans, LA, in May 1995. While studying there, he served the Prentiss Baptist Church of Prentiss, MS, as Youth and Activities Minister. After completing that study, he served the Kingwood Southern Baptist Church of Kingwood, WV, as pastor for 10 years. In the course of that ministry, he met and married his wife Amy and they had three children before he returned to school. Grace was born in January 2000; Clay was born in October 2002; Zoe was born in May 2005. In December 2010, he completed a Doctor of Philosophy in Systematic Theology at the Southeastern Baptist Theological Seminary in Wake Forest, NC.

In September 2012, Amy gave birth to the Persons’ fourth, Josiah.

Dr. Persons writes a regular (bi-monthly) column for the North Vernon Plain Dealer and Sun. He also shares a devotion each weekday at 6:35 a.m. with the radio audience of WJCP 1460 AM/97.7 FM.

Bro. Ricky (as he prefers to be called) loves to preach and teach God’s word from the pulpit and in every realm of ministry and makes the study of the Word a high priority. He states that he preaches to himself and invites whoever will, to listen. He often offers to meet with folks at their table with a cup of coffee or a coke and an open Bible. He is confident that the Spirit of God will use the truth of God’s Word to win and woo our hearts.

You may contact Bro. Ricky via the church office phone or by email at broricky@hotmail.com.